State Counsels based at the Western Divisional offices

The ODPP has four offices in the Western Division, providing prosecution services to Fijians living in Sigatoka, Nadi, Lautoka, Ba, Rakiraki and Tavua.

The Lautoka office also serves the outlying islands in the western division, including the Viwa Island, the Yasawa and the Mamanuca group of islands.

The Nadi-ODPP predominantly prosecutes cases from the Fiji Border Police and the Sabeto, Namaka and Nadi police stations.

The Nadi office receives a number of Border infringement cases of possession or transfer of illicit drugs.

For the benefit of the public and the state counsels, the Nadi office is conveniently located within walking distance to the Nadi Magistrates’ Court, the town area and public transportation.

There are two legal officers, Mr Josaia Niudamu and Mr Alvin Singh who are managing the Nadi office with administrative support from Ms Vasiti Adikula.

The Sigatoka-ODPP prosecutes cases received from the two main police stations in Sigatoka and seven police posts in that vicinity.

The Sigatoka office is managed by Ms Julieen Fatiaki and is assisted by Administrative staff, Ms Vineshni Deo and Mr Luke Nakulanikoro.

The Ba-ODPP prosecutes matters from the Ba, Tavua, Rakiraki, Nalawa and the Vatukola Police Station. The ODPP lawyers from the Ba office prosecute cases at the Lautoka High Court and at the District courts of Ba, Tavua and Rakiraki. 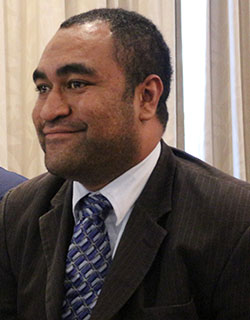 Our Lautoka office is conveniently located within walking distance to the Lautoka Court House, the Lautoka city centre and public transportation.

The Lautoka ODPP is managed by Principal Legal Officer, Mr Semi Babitu who also oversees the management of the other three offices in the western division.

He has a team of three legal officers, including, Ms Shelyn Kiran, Ms Rukalesi Uce and Ms Wakesa Elo.